Daniel grew up in the remote mining town of Mount Isa, North West Queensland. At the age of four he began piano lessons with local music teacher Mrs Banks. Visiting his cousins in Toowoomba for Christmas four years later, by chance they had borrowed a drum kit. With curiosity Daniel jumped right on and demonstrated great natural potential. He has never looked back.

Throughout his childhood Daniel participated in school bands and performed at many Eisteddfods as a soloist and band and ensemble member. Band tours included outback towns such as Camooweal and Longreach as well as Townsville, the capital of North Queensland. He undertook A.M.E.B (Australian Music Examinations Board) on piano. From a young age Daniel was noticed as a promising musician.

In 2004 Daniel moved to Brisbane and began secondary education at St. Laurence’s College. He soon joined the Queensland Youth Orchestra Wind Ensemble on percussion where he gained his first understanding of the intricacies of the orchestra.

As the years went on, Daniel continued to achieve highly on both piano and percussion but he sought something new for his musical path. At the age of 14, he discovered the idea of writing music. This marked the beginning of Daniel’s compositional career. For the next couple of years he began writing music for his own interest, discovering ideas and methods of composition through instinct and intuition. 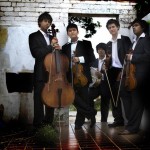 Daniel embarked on a new experience forming dEAP – a contemporary string group with him as drummer. The teacher who mentored this group started looking for music for them to play. Daniel realised this could be his first opportunity to write music for an original ensemble. Hesitantly, he asked if he could write music for them, which fortunately was warmly welcomed. The ensemble enjoyed his piece so much, he was asked to write a few more. Within a few months his work was premiered at the Brisbane Powerhouse and later performed at the Brisbane Convention Centre. Fellow students and teachers began noticing his talent, and most importantly enjoyed his music, which supported his confidence in producing more work.

As a member of the college choir Daniel asked the choral director if he could also write
music for this ensemble which again was warmly welcomed. This time however there
was a real sense of anticipation. He wrote a piece named Rain Drops.


They performed this piece at several concerts including the Queensland Catholic Schools &
Colleges Music Festival where Daniel received an Award of Excellence in Choral Composition (2007). Other schools began requesting Rain Drops, as did Birralee Blokes, international
Kathaumixw Choir of the World 2012. Rain Drops continues to be performed.

Daniel loves films. In his teenage years, after watching his favourite films over and over
again, he would hire the DVDs to watch the behind-the-scenes footage. It was the
creation of film that most intrigued him and he discovered the importance of film music.
With his passion in music he soon imbibed the world of film composers. He was
immediately drawn in. Daniel had discovered the best of both worlds.

He soon developed an understanding of the purpose of film music, and the vast quantity
of creative possibilities it held. What drew him closest to film music was the idea of
musical emotion represented through music – his music. He loved the idea of how music
was used to express a character’s emotions and influence the audience. By this time he
was confident that composition was the career path he wanted to follow.

Up to this point, Daniel had only learnt composition through his own means. It was formal tertiary study that opened up a new world of musical composition. Daniel completed a Bachelor of Music (Composition) at the Queensland Conservatorium of Music, Griffith University. He learnt new and varied methods of writing music and discovered alternative concepts for composition.

Much to his excitement Daniel began his first work with film whilst studying at the
Conservatorium of Music. He worked on several short films with students from the
Griffith Film School. He developed a reputation throughout the film school, scoring over
30 short films – ranging from dramas, educational and instructional films, to
short film musicals.

His first recognition for film music came in 2009, when he won the ‘Score It’ competition
in his age group at the Queensland Music Festival. Since graduating in 2011 Daniel has
been building a network of connections from which he sustains both lines of music
composition – screen and choral & orchestral. He was a finalist nominee for
Best Original Screen Music at the Queensland New Filmmakers Awards in 2012.

Daniel currently works with film production companies, music production companies,
and independent filmmakers for his film music. He works closely with music technology,
often integrating electronic elements with the traditional orchestral instruments, giving
his music a modern edge. He continues to collaborate with several schools and
community ensembles for his choral and orchestral work.